I use Photoshop CS5 on a 2015 MacBook Pro.  The version of OS X is 13.6.  CS5 and I are old friends, so I have never sought out newer versions of Photoshop.  Until recently, Photoshop CS 5 has played well with all the different servers I have had over the years.  My servers have always been “older” PCs, stuffed with a big hard drive(s), and whatever the current version of Ubuntu Server software was at the time.  My current projects demand a lot of storage, much more than I could stuff into my latest home-built Ubuntu-powered server, so I purchased a Synology NAS.  It was a good move.  The Synology NAS is terrific, and well suits my needs.  I added the data from my old server to my new one using “rsync” (for more about rsync, click HERE).  All the data and my file permissions transferred perfectly.  I tested “read, write, and save” functions with several programs transferring data to and from my new NAS.  Everything worked fine…., until I tried to save a file I was editing in Photoshop.  Upon saving my file to the server, I got the dreaded Photoshop Could Not Save File Because Write Access Was Not Granted.

Out of the box, I knew “write access” was not a problem.  The Mac’s Finder program behaved normally, and other programs could get access to the server and read, write, save, etc.  I spent a considerable amount of time searching for the cause of the Photoshop Could Not Save File Because Write Access Was Not Granted error, and could not find a definite reason.  In general, the obvious cause is that there is “something” going on between CS 5 and the version and/or the configuration of Linux used in the Synology NAS.  I made several attempts at both file and network configuration changes on the NAS, and found no joy, on every test I got:  Photoshop Could Not Save File Because Write Access Not Granted.

The only option left was to see if changes in the Photoshop configuration might solve the problem.  After some more research, I found that Photoshop image previews could cause a hiccup when an image is being “saved”.  The fix is to turn off the saving of preview images.  Here’s how to do it (see image below):  On your upper menu bar, click Photoshop, then Preferences, and finally File Handling.  Under File Saving Options, in the drop-down box to the right of Image Previews, click on Never Save. 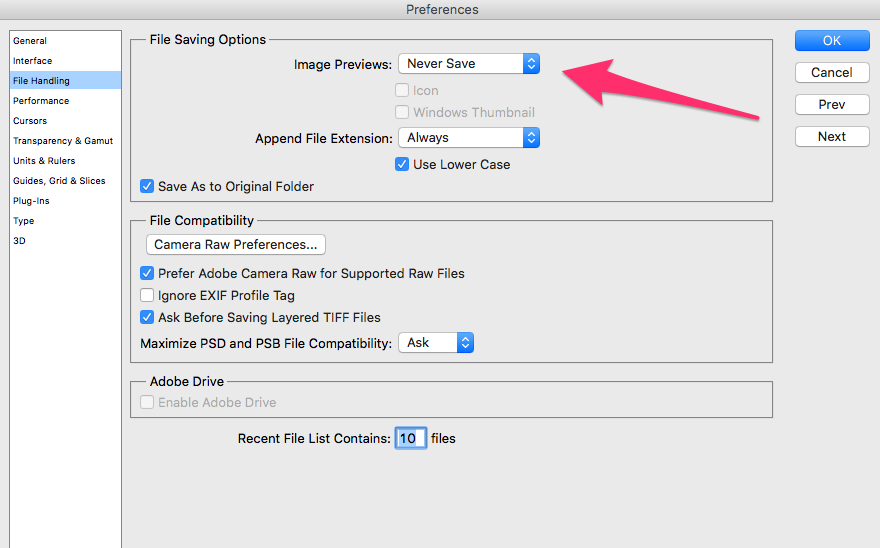 Since making this change, CS 5 is working well the Synology NAS, and the dreaded Photoshop Could Not Save File Because Write Access Was Not Granted error message has not been seen again. 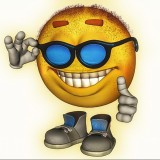 This did not help me.

Sorry this was not a fix for your situation. I have successfully used this solution on numerous Macs in my office that are saving files to Synology NAS’s and Ubuntu Servers. However, Macs on Mojave with older versions of Photoshop (like CS 5) are an exception. They are in fact a recipe for disaster. In my case, I could save a file to the server or NAS, and after updating the file, it would either be eliminated completely, or unable to open. After doing some research on this, the problem is how Mojave interacts with older versions of Photoshop (or vice-versa). I can find no fix for this, other than installing a current version of Photoshop. On High Sierra/Sierra and older OS X’s all is well. When I wrote the article with the “fix”, Mojave was not yet distributed.

Unfortunately, I am using the Mojave OS and the ‘Fix’ described doesn’t work for me. This does appear to be unique to a iMac as using the same software on Windows 10 the error doesn’t occur.

Having same problem as above. “Could not save as “Untitled-1.psd” because the file is locked, you do not have necessary access permissions, or another program is using the file. Use the ‘Get Info’ command in the Finder to ensure the file is unlocked and you have permission to access the file. If the problem persists, save the document to a different file or duplicate it in the Finder.” Tried all fixes to no avail.
Stats: Imac 2018, Mojave 10.14.6, up to date Adobe programs.
I have art work I need to save immediately and it won’t save as. Already had a file just evaporate while I stepped away from computer.
Any new fixes? I am at a real loss right now.

You did not mention if your tried the a config change I used to solve the problem in my article here:https://larrytalkstech.com/fix-error-photoshop-could-not-save-file-because-write-access-was-not-granted/.